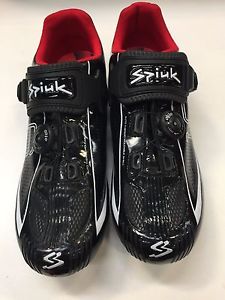 I seem to be writing more about cycling than anything else at the moment. I even have some more posts lined up on the subject, but there are few IT related ones coming too.

Anyway, I just got these the the other day to replace my old Scotts that had served through a hard Brittany winter. I got them because I read they were incredibly comfortable.

They are pretty standard fair for their RRP of €145. Sadly there is no carbon sole, for which you have to trade up to the Z16RC for an extra €50. What you get is a polymide/glass-fibre composite. It is stiff enough, but not earth shattering. Unless you are Mark Cavendish it is fine, but carbon would definitely be stiffer. It is possible to get a carbon sole for around this price, especially with offers, but that is not enough for me to be critical of Spiuk for not having it.

Spiuk says they have an "Ergonomic, edgy and youthful" design. I have no idea what that means, but I think they look pretty good. I have them in black with white highlights; they are also available in white are floro yellow. They are bit too glossy for my taste if I am honest, but that is not a deal breaker. I have not got them dirty yet, so I do not know how well they clean up, but they look like they can just be sponged clean. Spiuk say to do exactly that, with just a bt of warm soapy water. Living in Brittany means it will probably not be long before I get to test that :-).

The closure is a single "Atop" dial (with a kevlar cable) and a ratchet strap. The dial does not have the micro adjust release that you see on some shoes, you release it and it undoes completely. It is pretty simple to tighten it up slightly as you ride along, so I do not find that troubles me. The ratchet works well, and between the two it took me about 500m before I was perfectly happy. What I did like is that there are two sets of straps in the box - one set a little shorter. For people like me who have fairly fine feet that means there is no excess flapping around.

Another extra in the box is the second set of insoles - you have pair for warm weather and another for cool. I think that is a really nice touch.

The standout feature of these shoes though is their "thin heat-moudable layer". The idea is that they mould to the shape of your foot a room temperature. You put them on a do them up a little too tight and spend the next hour or so wandering around. I did exactly that, much to the amusement of my colleagues who wondered why I was walking around in my new cycling shoes. Lo and behold, during that time I honestly felt them getting more comfortable.

That evening I put the straight on and road home:

On the first ride, they were unbelievably comfortable. Honestly, I have never worn a pair of shoes that were so comfortable. I had them on again the following morning, and if anything they were even better. The air flow was really good too, it was about 25ºC and my feet were fine.

So, TL;DR: Incredibly comfortable, with some nice features and good value. Carbon soles would be nice though for a bit more power transfer